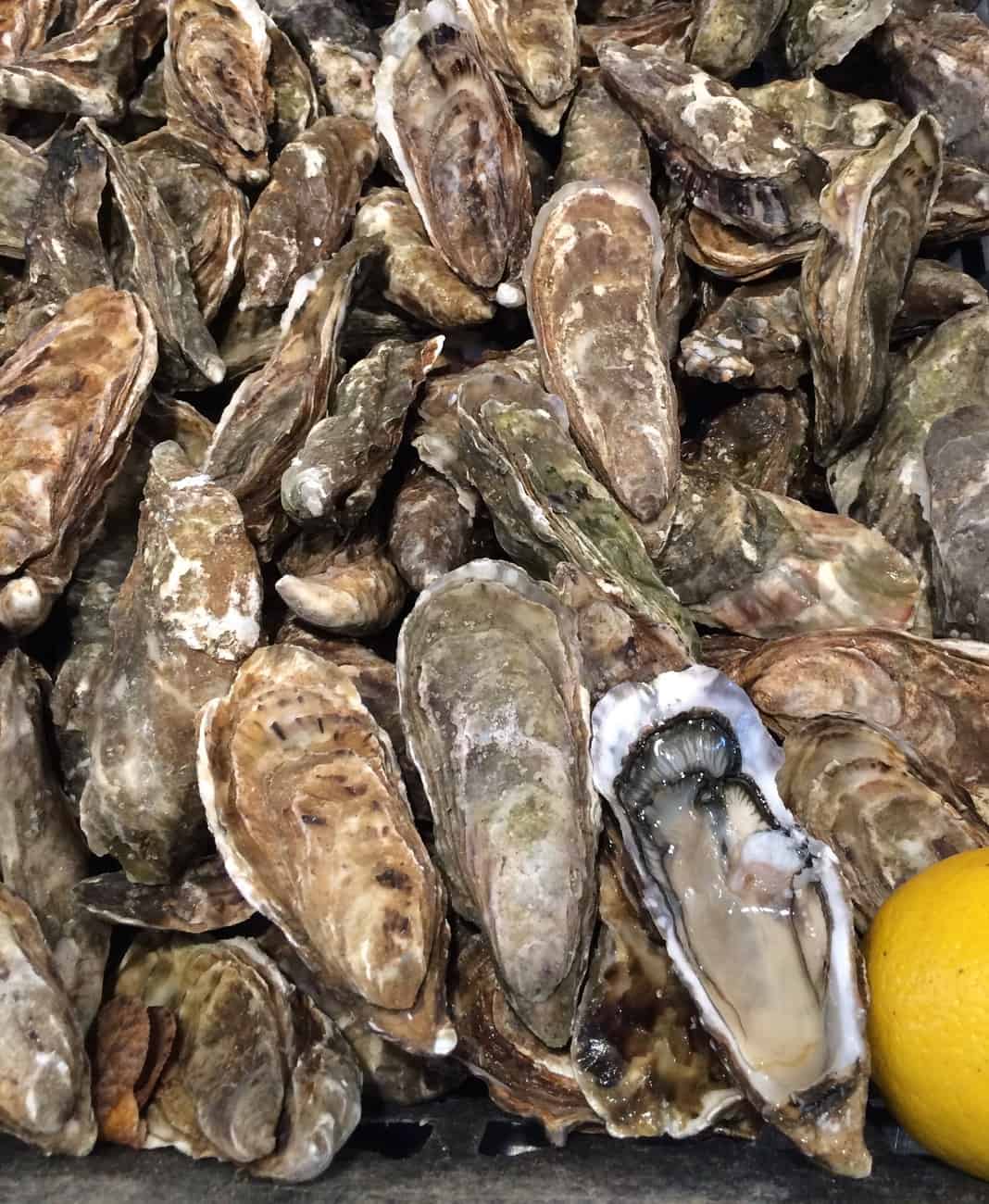 After the Loire, we continued our leisurely progress south, stopping for just one night at Saint Cyr just north of Poitiers. We found a great campsite, on the edge of a lake, whose cool waters were very welcome for an afternoon swim when we arrived.

Everywhere is very dry down here and the grass is parched and brown, the only green being provided by the trees and by huge fields of corn. The latter are kept lush by giant sprinklers that fling great white arcs of water into the air, creating miniature rainbows in their wake. As well as the corn, there are vast fields of sunflowers, their heads now drooping, waiting to be harvested and swathes of golden stubble where wheat once stood tall. Andy and I cycle camped through this region in 2002 and so many of the place names on the road signs – Onzain, Vouvray, Blois, Tours, Chinon, L’ile Bouchard, Vendôme – brought back happy memories of that time and of towns and campsites at which we stayed.

Eventually the flat landscape of the Loire gave way to more gently rolling hills and soon we were approaching the coast and our next stop, just south of La Rochelle.

Highlight: the Aquarium in La Rochelle

The aquarium in La Rochelle has a very good name and it was recommended to us by a number of people if we were passing through this area. It is big, and is organised into sections relating to different marine environments – the Atlantic, the Mediterranean, Caribbean, Indo-Pacific etc, with lots of information about each ecosystem and detailed descriptions of the fish, coral and other creatures on view. We learned, for example, that millions of years ago when the Gibraltar strait opened up, there was the greatest waterfall in history: 14 million cubic metres of water per second flowed for a century from the Atlantic into the area that is now the Mediterranean, filling it with water and lowering the world’s ocean levels by 12cm! We also discovered how important coral reefs are in providing varied habitats for many species of fish, particularly in the Indo-Pacific area, where there are nearly 4000 different species to be found.

The aquarium has the usual creatures you would expect, including several kinds of shark and the ever popular ‘Nemo’ clown fish. It also has a wonderful array of colourful, striped, camouflaged and just plain weird looking fish and sea creatures, both big and small. Then there is a whole tunnel where you are surrounded by eerily beautiful jellyfish pulsating and rippling silently past you. 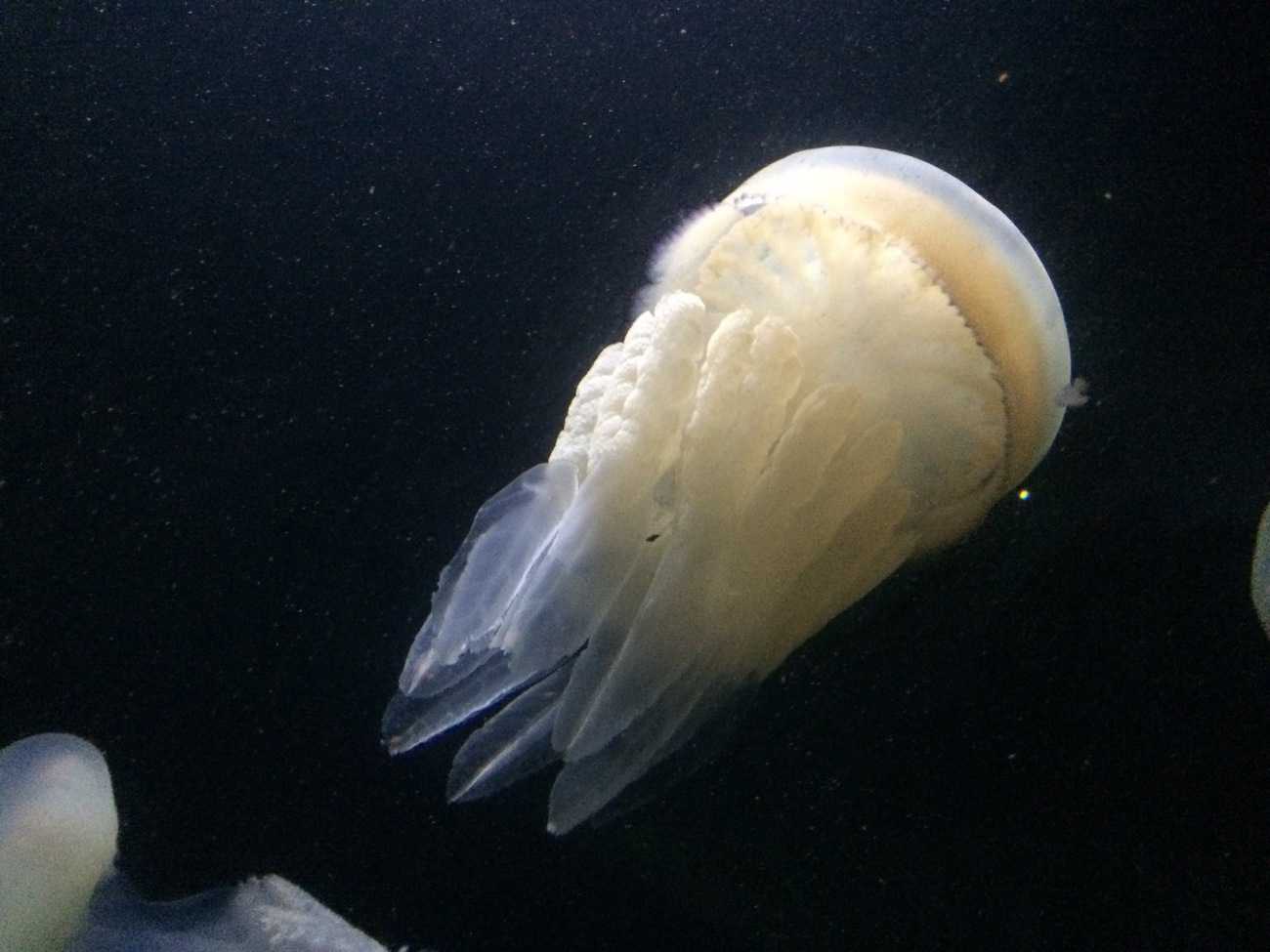 There is also a new ‘gallery of lights’ which explains bio-luminescence – the ability of some organisms to produce light by means of a chemical reaction – and has a myriad of coral and other creatures that are glowing different colours in the darkness. We learned how the light changes and eventually disappears as you get deeper down. After 150m, 99% of all the sunlight is absorbed as it passes through the water, with red disappearing first, then green and finally blue. Beyond 1000m, there is total darkness.

Then there was the highlight of the show as far as the girls were concerned – a loggerhead turtle called Belle. Loggerheads are apparently now an endangered species and Belle was worn and bred in captivity in 2011. The aquarium was very keen to explain how she and other turtles are part of a special programme where they are released into a sheltered bay in the south of France in order to study how they adapt to living in the wild. They hope that this will help our understanding of these magnificent creatures and possibly enable turtles bred in captivity to one day be released into the wild. Despite all of this, and of our absolute joy at watching this graceful turtle, we still felt uncomfortable seeing such big creatures as the sharks and turtles in these relatively small tanks 🙁 The aquarium claims to hold 1.5 million litres of sea water, but this is still (if you pardon the pun) a drop in the ocean compared to their natural habitat. 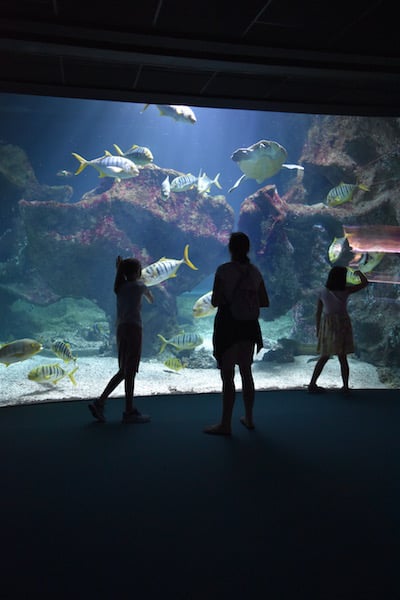 Virtually all of the information was presented in both French and English, which made a huge difference to our enjoyment (and understanding!) of the aquarium. In fact, we have found this to be the same at most of the places and museums we have visited (Bayeux, Chateau Chambord, Eiffel Tower etc), which has been great.

Other things we did:

We spent a day on the delightful island of Île de Ré, which can be reached from La Rochelle via a 3km bridge. It is only 30km long and about 5km wide, with some beautiful beaches and quaint villages. It is also completely flat, which makes it ideal for cycling and that is what many people were doing, making use of the miles of cycle paths that criss-cross the island. Unfortunately M had really badly bruised her leg on the campsite playground the day before and so cycling (or indeed walking any great distance) was off the cards for us. Instead, we headed for the capital, St Martin de Ré to get a feel for the place.

The main road through the island was very busy with cars and trucks and for the first few kilometres we didn’t see the picturesque island we had been hoping for. But when we pulled off the main road, what a difference we found! St Martin is a charming little town, with narrow cobbled streets, small shops and lots of restaurants nestled around the busy harbour. On first sight it reminded me of Padstow in Cornwall. And as we sat and people watched, this view was reinforced by the fact that virtually every voice I heard was British! Of course, we Brits know when we find a good thing, and Île de Ré seemed like a perfect summer holiday destination. The atmosphere is relaxed and laid back, the weather is good and there is a gentle sea breeze to keep the temperature down a bit. 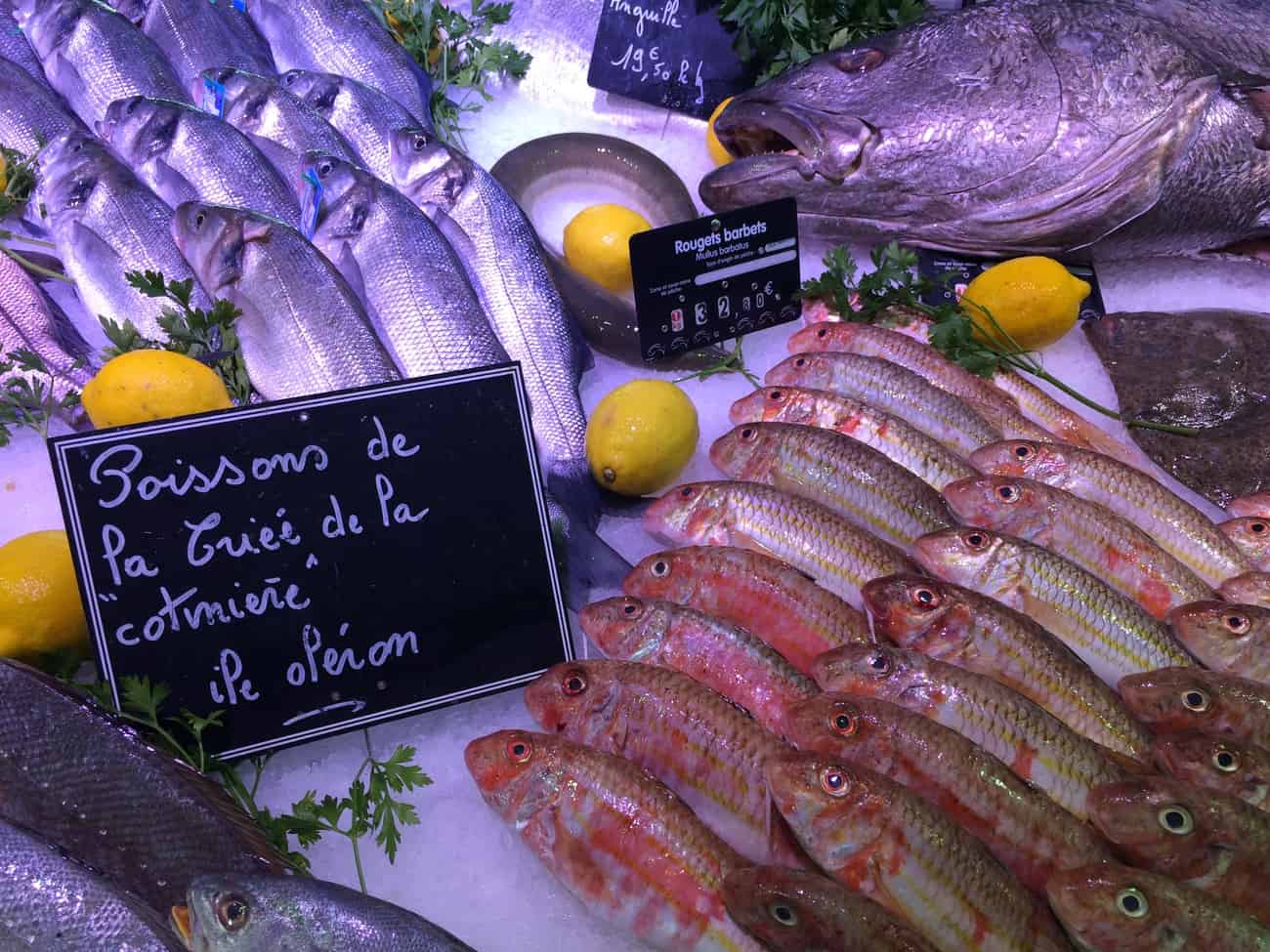 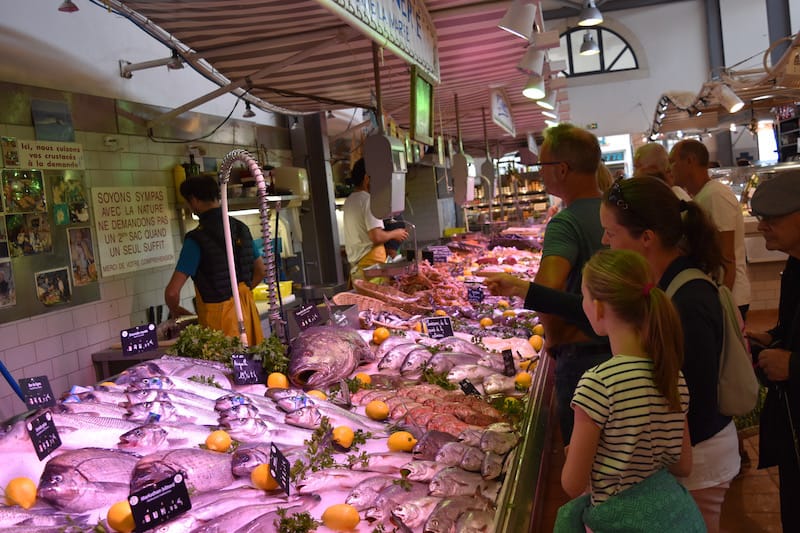 We spent a while marvelling at the range of seafood available at the local market and walked around some of the walls of the old town and up to the remarkably preserved citadel, built by Vauban in 1681 under the orders of Louis XIV.

Our next move will be heading north (and no, we’re not heading home – yet!) into the Vendée region. We’re holding off going down to Bordeaux for now as it is even hotter down there!

The village of Les Boucheleurs is known for its traditional mussel and oyster farming, and there were many little stalls selling these straight from the producers to the public. Walking along the newly built promenade, we could see the beds just off the shore when the tide was out. There was a very small beach, with a larger beach a little further along the coast at Chatelaillon-Plage. They appear to be spending quite a lot of money upgrading the seafront here. They have already built some breakwaters to make a little harbour and work was still in progress to complete the promenade all the way along the front. 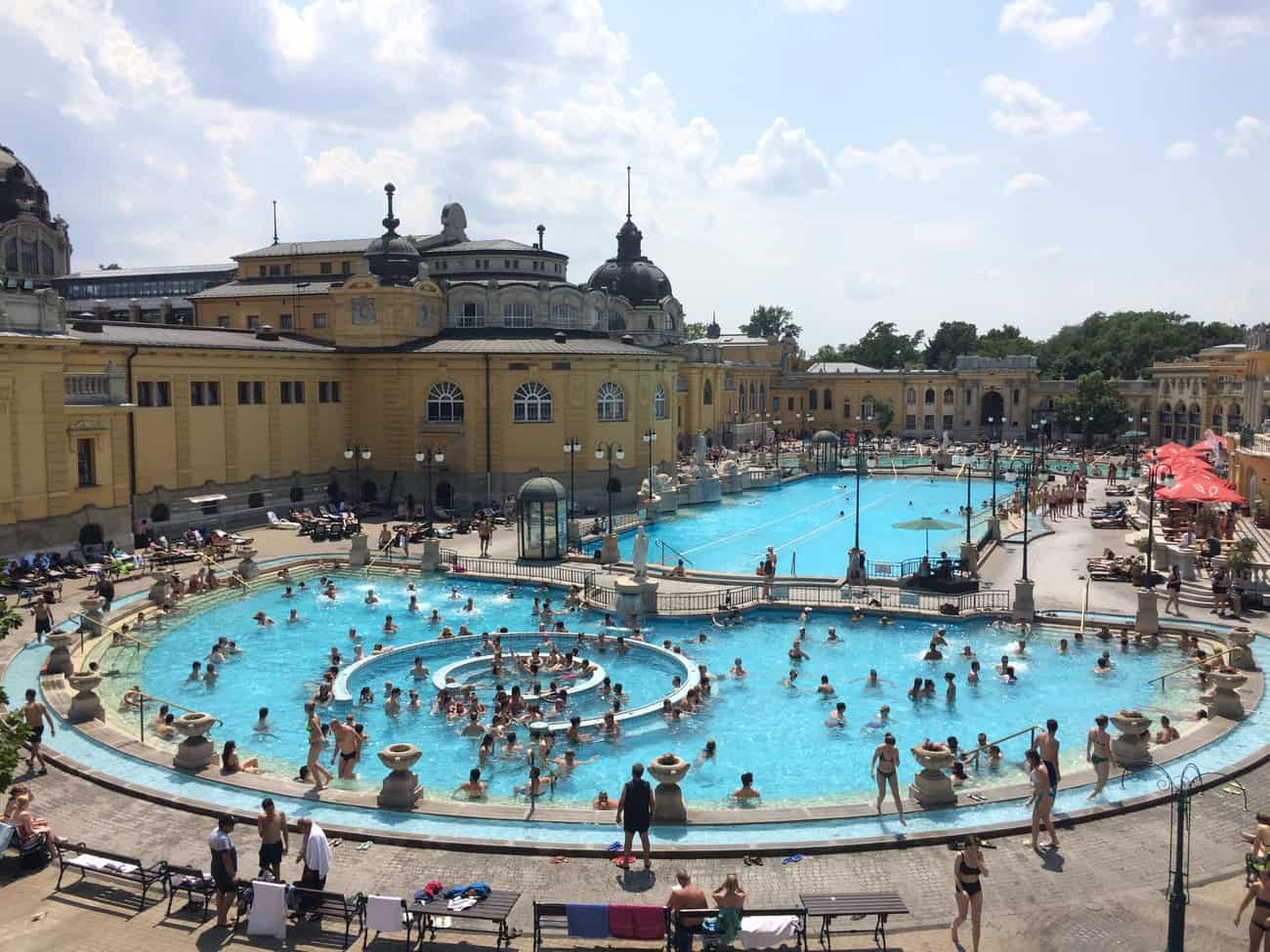 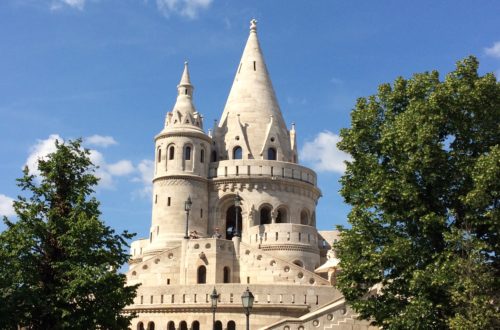 Budapest: Exploring Buda and Getting Around 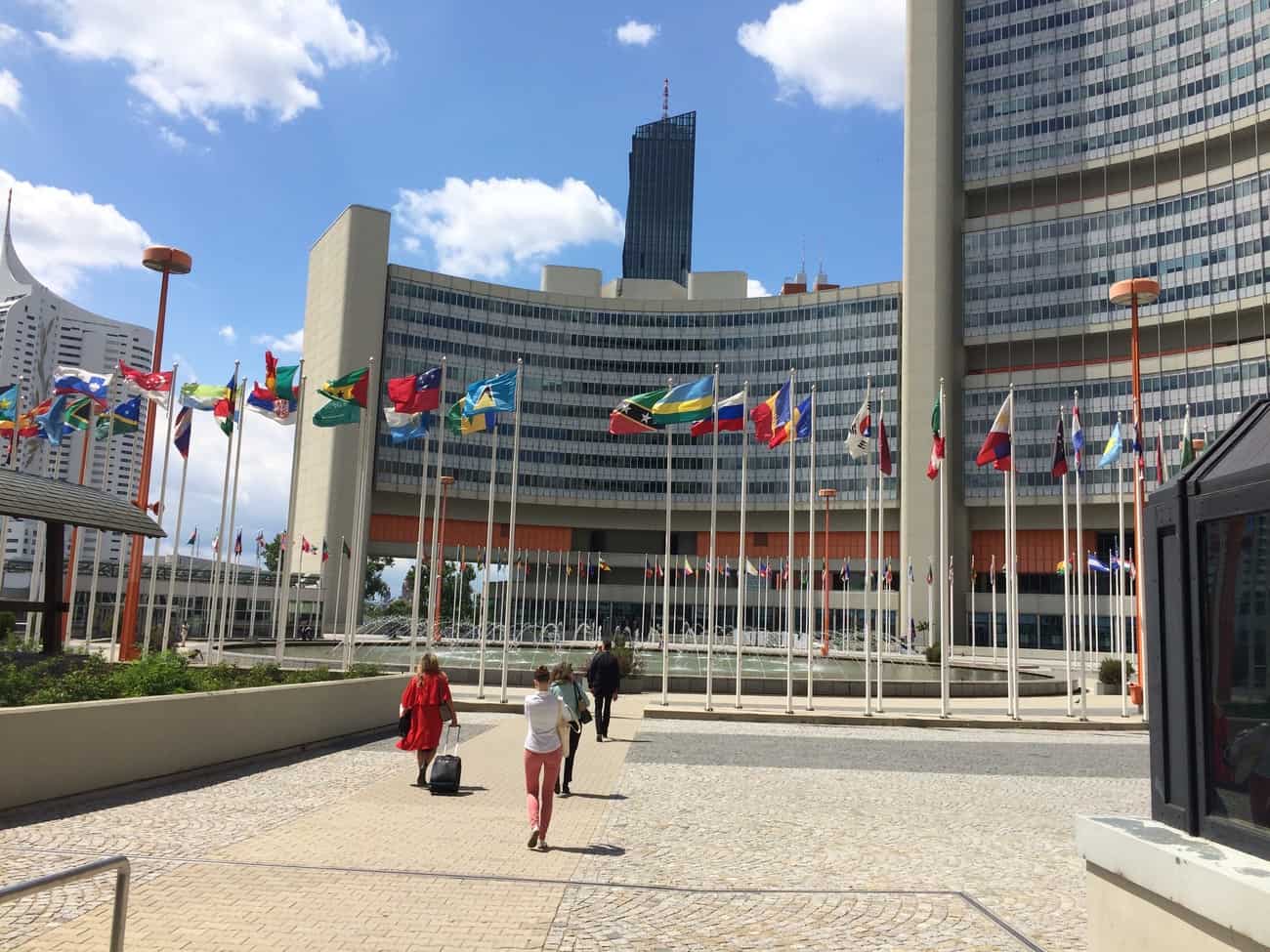 We use cookies to ensure that we give you the best experience on our website. If you continue to use this site we will assume that you are happy with it.OkWebsite Policies