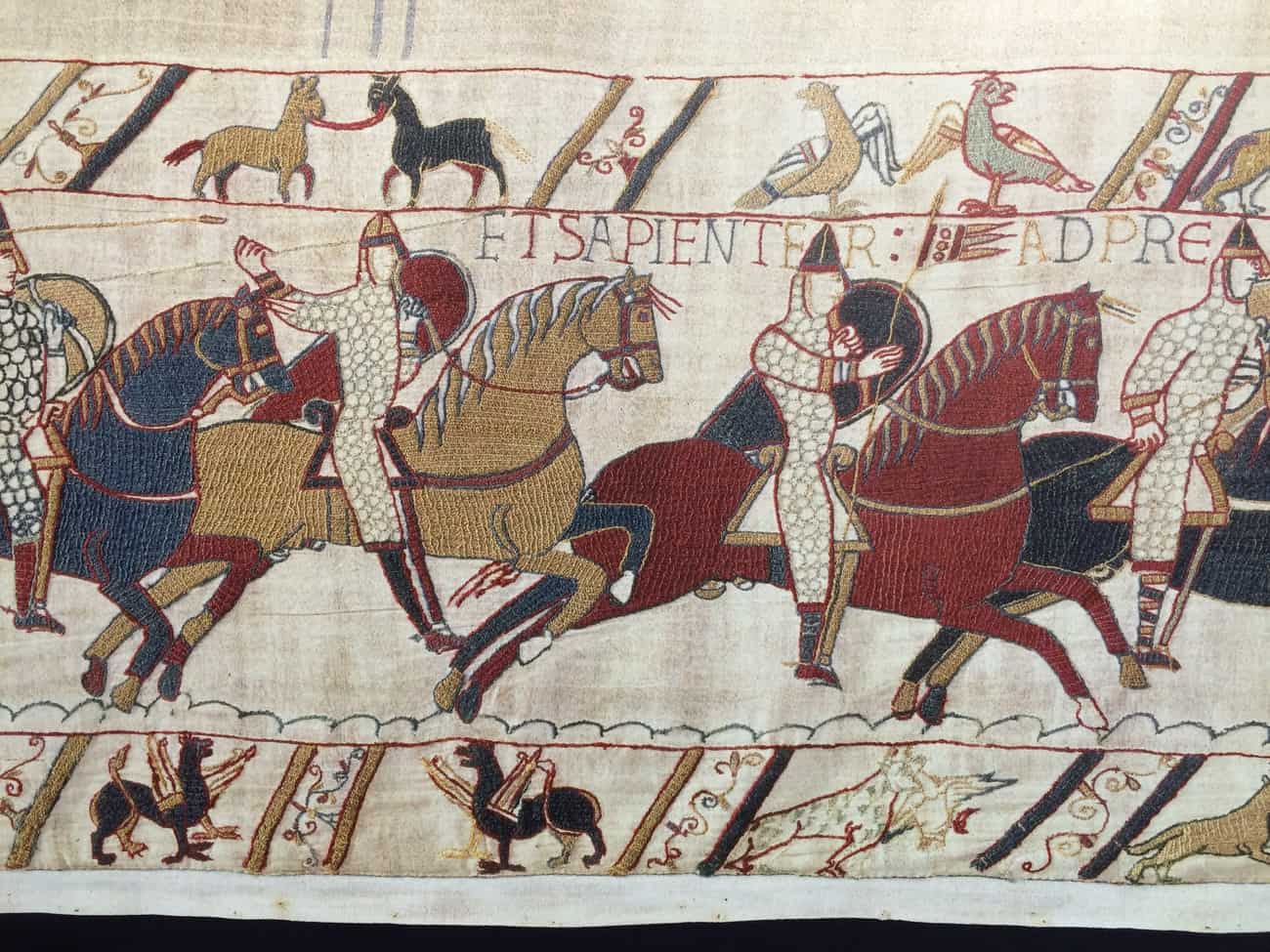 One of the things we wanted to do whilst in Normandy was see the Bayeux tapestry. Having been to the 1066 battle site in Hastings, it seemed fitting to go and see the tapestry that records the events of that day and the lead up to it. Our arrival in Deauville had been rather a wet one. In fact we drove virtually all the way from St Valéry sur Somme in the rain, put the awning up in the rain and then it rained most of the night as well. We woke to a really soggy campsite and rain set in for the day – a perfect day for a visit to a museum!

Bayeux itself was a beautiful town, dominated by its striking cathedral, surrounded by many old, half timbered houses. It was the first town to be liberated after the D-Day landings and so has remained more intact than some of the other towns in this region that saw a lot more bombing and fighting. Neighbouring Caen for example was one of the last towns in this region to be fully liberated and as a result it was virtually flattened.

Anyway, I learnt two quite surprising facts on our visit: firstly, the Bayeux tapestry is not a tapestry at all but an embroidery! It is stitched, not woven, in woollen yarns on linen. And secondly, it almost certainly wasn’t made in Bayeux! Most historians believe that it was actually made in the south of England, most likely Canterbury, around 1070, although there is still debate about this. Most historians also believe it was commissioned to decorate the nave of the new cathedral of Notre-Dame de Bayeux, which was dedicated in 1077. In fact, it is known that it was displayed here during the Middle Ages for the Festival of Relics that took place each July. The rest of the time it was stored, rolled, in a wooden chest in the vestry of the cathedral. It has had various other homes since then, the most amusing of which was that in November 1803 Napoléon Bonaparte had the tapestry brought to Paris and displayed in the Musée Napoléon (now The Louvre) in order to increase popularity for his idea of invading England. By February 1804 he had abandoned this idea and personally gave the order to return the tapestry to Bayeux.

The tapestry was commissioned by Bishop Odo of Bayeux, half brother of William the Conqueror. It is 68.3 metres long and 50cm high and is made up of 9 linen panels held together by fine stitching. It is displayed in a darkened room in a glass case in which the light, temperature and humidity are all controlled, to prevent damage to the delicate fibres. You are given a really good audio guide that explains what is shown in each scene, but this starts automatically when you enter the room and cannot be paused, stopped or rewound. The girls were also given a children’s audio guide that was different to the one Andy and I had. This was great, because it was more appropriate for their age, but the result was that when they told me they didn’t understand what it was saying, I had no clue what they had just heard. I couldn’t pause it or go back to hear it again and whilst they were asking me questions, I missed the next part of my audio, which I also couldn’t go back and listen to again! It would’ve been better if we had all had the children’s audio guide, but despite me asking at the desk, they would only give these out for the children.

Anyway, all of a sudden we were into the audio guide and in front of the tapestry and we were whisked along, learning all about the scenes depicted in it. Having just been to Battle near Hastings, it was interesting to see how different the historical explanations were. Unsurprisingly, there was slightly more of a slant towards William here in Normandy than there had been in Hastings. As well as the battle itself, the tapestry also depicts the events that ran up to the battle of Hastings and contains quite a lot of information to basically justify William’s invasion of England.

In 1064 Edward the Confessor had ordered Harold to travel to Normandy to confirm with William that he (William) would succeed Edward on the throne of England. There is a key scene in the tapestry in which Harold swears on holy relics that he will uphold Edward’s wishes and let William be King. However, as we know, on the death of Edward the Confessor, Harold went back on his oath and was crowned King. Faced with this affront, William (and Harald Hadrada of Norway) both challenged Harold for what is described here as “the lost crown”. The audio guide makes much of the fact that it was an insult to William that Harold had taken the throne and suggests that it was really divine retribution that Harold was killed at Hastings because he had sworn in the holy relics that he would let William be King.

What struck me most upon seeing it were the colours. It is obviously one of the most recognisable historical objects in the world and images of it are reproduced in countless history books and other locations. But they often look very dull and grey and the linen background quite yellowed. In actual fact, although the tones of the tapestry are quite muted, it was considerably more colourful than I expected. There are 10 colours in all – dark, greeny-blues, burgundy reds, yellows, dark blues and greens. All of the dyes were made from plants – woad for the blue colours, madder for the red and weld for the yellow – which were combined to achieve the range of colours needed. Yes, parts of it are still quite grey and yellowed, but overall the colours are much more vibrant in real life. You obviously aren’t allowed to take photographs of the real tapestry, so mine are photographs of the life sized image of it that is found in the exhibition upstairs. Hopefully you can get an idea of the range of colours used, particularly in the scenes with the horses and boats. The scenes are also depicted in 2D, but the embroiderers cleverly used different shades and colours to give real depth to it. Look at the different colours used for the horses near and far legs in the photo below, and the way in which a sense of the charge is clearly shown between the first and second image.

The tapestry was made using only a few different stitches, including one that is now known as Bayeux stitch (see below) and it really is quite a beautiful and stunning piece of work, all the more so for having survived all these years.

Unfortunately, although I would’ve loved to, you couldn’t really go back to have a closer look because there was a steady stream of people behind you and nowhere to cut in. Everyone was kept moving by the pace of the audio guide. In reality though, if they didn’t keep everyone moving at this pace, the queues to see it would be around the town and back again!

Fortunately, upstairs from where the tapestry is displayed, there was an excellent exhibition all about it, with an actual size image of it around the wall, so you could study it in more detail here. There was also a lot of information about the battle and the Britain that William conquered, which was also very interesting. His legacy left us the Tower of London, the Domesday book and Norman castles across the country. Interestingly, he was crowned on 25th December 1066, in the new abbey church of Westminster, which had only been finished the previous year. Fittingly, it had been built in the Norman style of architecture!

Now, we should’ve learned by now that one museum in a day is enough. BUT, in Bayeux they were offering combined entry tickets to two or even three museums for only a few euros more and we had decided to try to do two of the museums whilst we were there. The other one we had chosen was the Battle of Normandy Memorial Museum and so after stopping for a brief refuelling, we pushed on.

It was an excellent museum, and one we had hoped would lay the foundations for a visit to the D-Day landing beaches later in the week. We watched a short film all about the landings and the Battle of Normandy that followed but unfortunately, although in English, the language used was far too complex for the children to follow and I think they appreciated it most for the opportunity it gave them to sit down for a few minutes. Before that, we had a brief look around the museum, which covered the landings and the battle in minute detail, taking you through events hour by hour, day by day, with photographs, diagrams and personal accounts. Unfortunately what we really needed was a general overview. We had almost reached saturation point and couldn’t take in much more information and the girls were rapidly losing interest too. We looked at the tanks and guns they had on display, and checked out the different uniforms of British, American and German soldiers and then after watching the film we called it a day.

By now it was about 6pm, the sun had finally appeared and we were all hot, tired and hungry. We needed food and we needed it NOW. Did you know you can get table service in MacDonalds here? They had touch screen ordering, where you could choose your language and then you had to select which section of the restaurant you were sitting in. Your printed receipt had a number at the top and you simply put this on your table, making sure the number was clearly visible and your food was brought over to you. Very civilized!

So, tomorrow we are meeting up with some friends in Deauville and we hope to hang out with them for a few days. 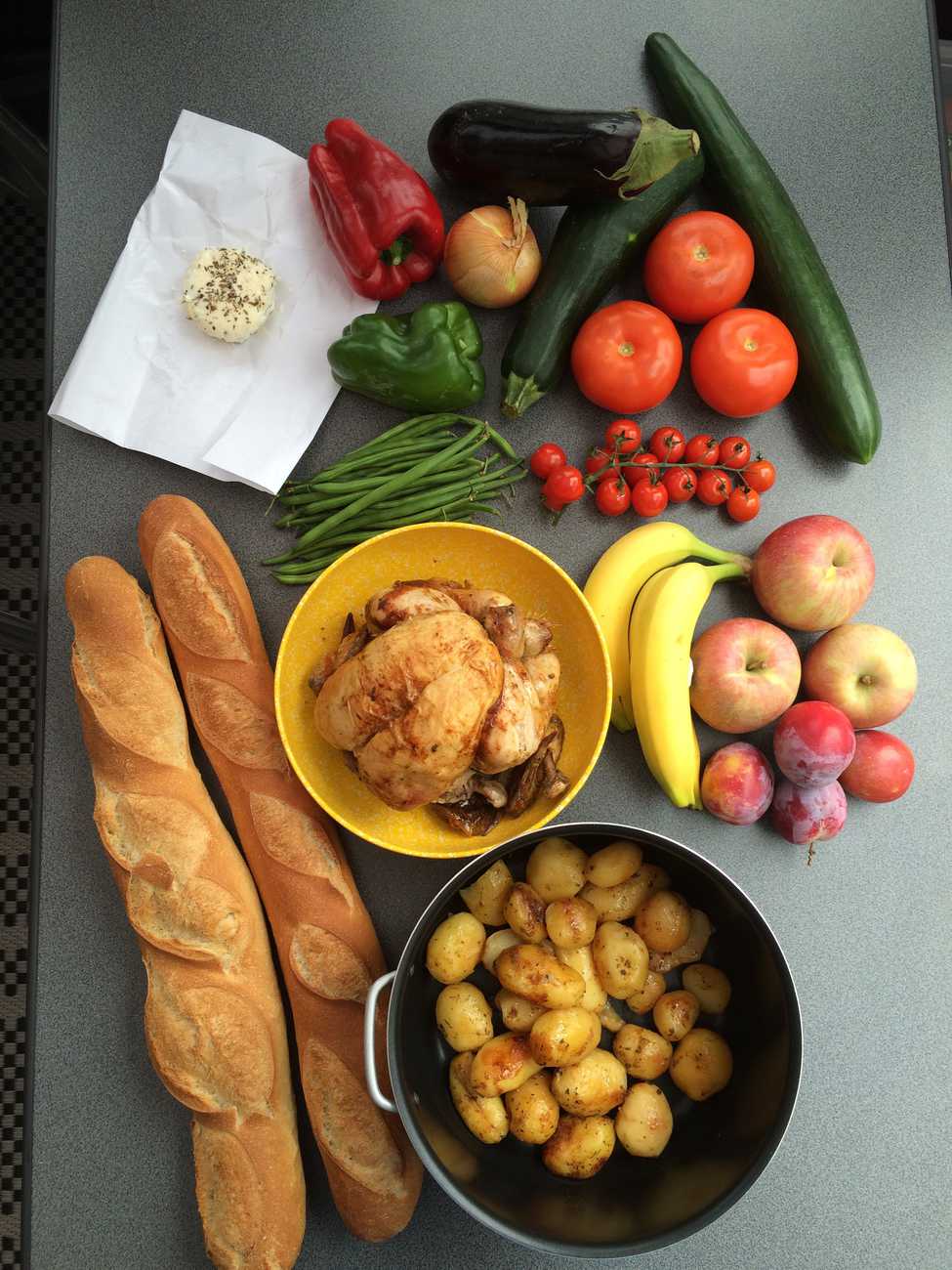 A Month in Provence

Theatre on a grand scale at Puy du Fou